During Georgian times there really was no middle class. There were just the very, very rich and the wretched poor. The poor could not afford to wear much jewelry of any kind, never mind the lavish diamonds and gems that the wealthy adorned themselves with. 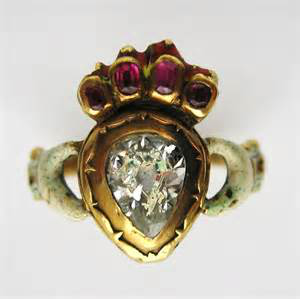 Georgian jewelry was all crafted by hand. This is noticeable because Georgian pieces were often lacking in symmetry from side to side. In addition, the mountings and prongs holding the gemstones seem crude in comparison with what we are used to today. All stones, even diamonds, had closed back settings. Faceted diamonds were rather "lumpy" in appearance. No two diamonds were identical, either. The general consensus of the era was to waste as little of the rough diamonds as possible. Therefore, they were faceted around their original shapes and sizes found in nature. 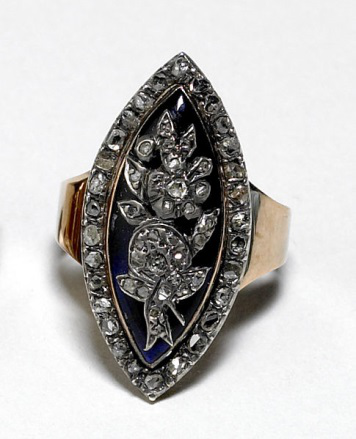 The rose cut was the favorite diamond cut during the Georgian era. By this time period, Dutch and Belgian diamond cutters were world renowned for this highly faceted cut. The marquise cut was invented during the Georgian era, as well. The notorious playboy king Louis XV had the marquise cut commissioned to mimic the lips of one of his lovers. Her name was Marquise de Pompadour. 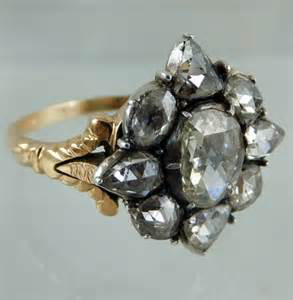 Paste (glass infused with lead) diamonds were invented just prior to the Georgian era in the early 1700s. These paste gems became as important as genuine diamonds during Georgian times. Hold-ups and robberies were common during an age where the wealthy flaunted their excess in front of the hungry poor on a daily basis. Rich travelers often wore paste imitations of their fabulous real diamonds and other gemstones. If these imitation jewels were taken, they could easily be replaced.

Two major revolutions (American and French) took place during this opulent time. The have-nots got tired of the extreme greed and oppression of their rulers. Marie Antoinette, the beyond-extravagant wife of King Louis XVI, was publicly beheaded by guillotine in 1793.