Jobs in factories were now readily available. These jobs provided commoners with a path to financial stability that had not been possible before. Retailers of all goods including jewelry raced to keep up with the enormous demand created by the new middle class.

Jewelry purchased by wealthy Victorians was at first made of 18K or 22K gold. The less affluent purchased jewelry made of silver or pinchbeck, an alloy combining zinc and copper. During the 1840s, the process of electroplating gold onto base metals was invented. After that, gold electroplated jewelry became popular, made with base metals like brass. In 1854, Britain legalized 9K and 15K gold, making the electroplating process even cheaper. 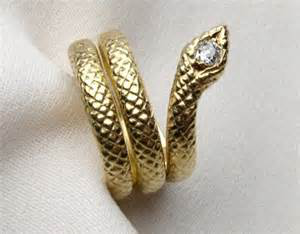 Even though the middle class finally had their own wealth, they did not ignore the very wealthy and their habits. Queen Victoria's influence on society dictated everything from social etiquette and customs to fashion and jewelry. When Prince Albert gave her an engagement ring in the shape of a snake, snake jewelry became a dominant Victorian theme. To the Victorians, the snake symbolized eternal love. Flowers, birds and bows were also popular themes of the era. All had sentimental, symbolic meanings.

After Prince Albert's death in 1861 and the onset of the Civil War in America, Victorian society followed Queen Victoria's lead and went into a prolonged period of grieving. Black clothing and black mourning jewelry came into vogue. 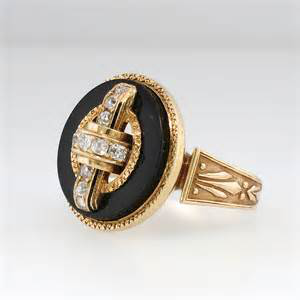 Jewelry also took on a heavier look. Most of it was made by machine of gold, gold plate, gold fill, silver or brass. Jet (black fossilized wood), tortoise shell, hair and other materials besides metals also were popular. Much of the jewelry had ancient Egyptian, Etruscan, or Renaissance motifs.

During the late 1860s, the bountiful Kimberly diamond mines in South Africa were discovered. These mines created an ample supply of diamonds on the market. The cushion shaped old mine cut was the most popular diamond cut until the invention of the steam lathe in the 1870s. After that, it was possible to create more rounded diamonds. The old European cut then became the diamond cut of choice. 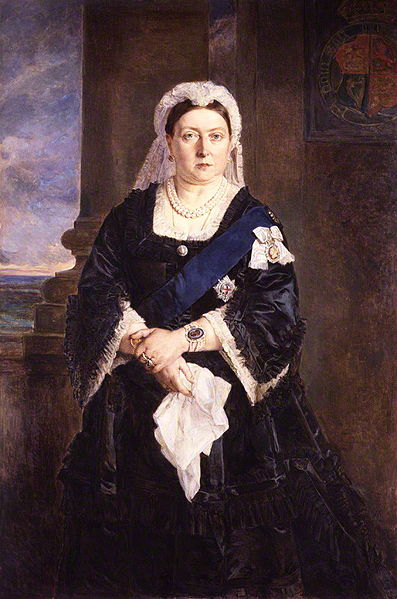 Diamonds might have been number one, but other popular Victorian gemstones included opals (a favorite of Queen Victoria), turquoise, garnet, amethyst, coral and seed pearls. In the late Victorian era, gunmetal also became a popular jewelry metal. It was an alloy of copper, nickel and zinc with a distinctive deep grey finish. Aesthetic movement chains with lovely etched scenes of the natural world came into vogue, as well.