The term "point cut" is a misnomer. It refers to diamonds in their naturally found octahedral (eight-sided) shape that have been polished, not cut. (Natural diamonds look like two pyramids glued together at the bottoms.) Diamonds were used in this form until practical tools to cut them were invented in Asia in the 13th century and in Europe in the14th century. The point cut diamonds of antiquity looked dark and dull. Nevertheless, those ancient diamonds were still coveted at the time for their supposed spiritual and protective powers. Because diamonds were so hard, only diamond dust could be used to polish them. For over a thousand years prior to this discovery, they were utilized in India and then elsewhere in their natural state. The Romans became quite fond of wearing point cut diamonds in rings and other jewelry. They perfected the art of polishing them and introduced the technique to the Europeans. 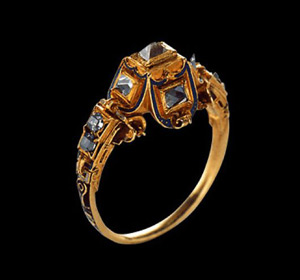 The table cut was the first widely recognized diamond cut. It was probably created after someone observed the top broken off of an octahedral diamond in nature. When the top of the pyramid" is gone, a flat inside surface or table is revealed. The table cut was introduced to Europe in the 1400s. The table cut is square with four step-down edges. The coveted emerald cut we are enamored with today evolved from the table cut. The emerald cut was first recorded to have been given as an engagement ring in in 1477. 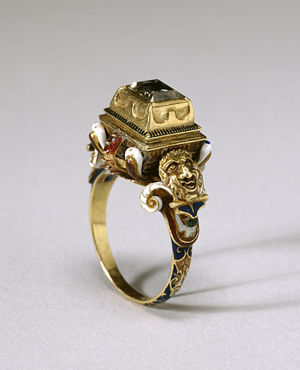 It may surprise you to know that the heart cut is one of the earliest diamond cuts that surfaced in Europe, probably shortly after the table cut. Tremendous effort must have been put forth to create this complex cut in those early days of European diamond cutting. The heart cut appealed to the wealthiest of people, including Mary, Queen of Scotts. She gave a heart shaped diamond ring to Queen Elizabeth I in 1562. 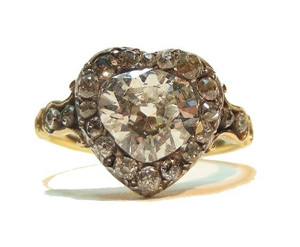 The pear cut was invented by Lodewyk van Bercken in 1458. He was a Flemish diamond polisher who also invented the scaif. This ingenious polishing wheel enabled him to quickly cut facets into diamonds with precision. The scaif transformed the diamond trade. It opened the door to the creation of complex diamond cuts not possible before. 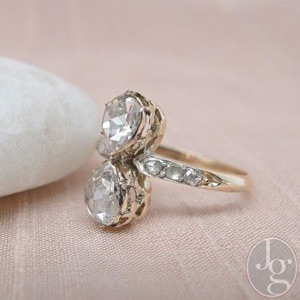 The rose cut was introduced to Europe sometime prior to 1530. The most popular variation had 24 facets and a high dome. It was said to resemble a closed rose bud. By the 1700s, Dutch and Belgian craftsmen became world renowned for producing the rose cut. It continued to be a favorite diamond cut in Europe throughout the 1800s. Now, after 100 years of obscurity, the rose cut is experiencing a 21st century revival led by master stone cutters in India. 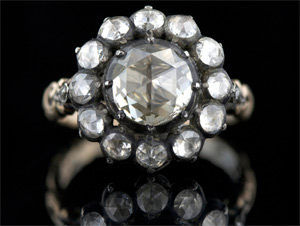 The briolette cut is a three-dimensional tear drop shape with 48 to 88 facets. It was derived from the rose cut. In 1811, Napoleon presented his second wife, Empress Marie Louise, with a fabulous piece of jewelry. It was a diamond necklace containing ten, 4-carat briolette drops. (Marie Louise is pictured in the graphic at the top of this page wearing her crown and the necklace.) Thanks to Napoleon's lavish gift, briolette cut diamonds became the rage with European royalty throughout the rest of the 19th century. 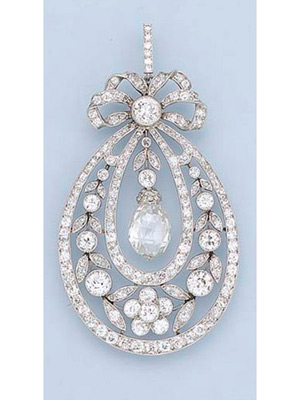 A Belle Epoque diamond pendant with a briolette diamond in center
(www.Christies.com) 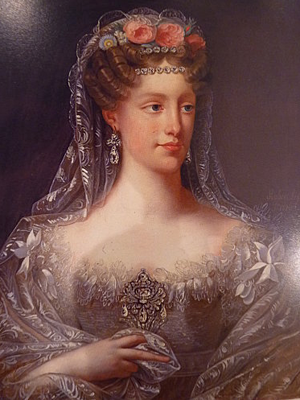 The Duchess of Berry by Lefevre, circa 1820.
Her earrings and brooch are dripping
with briolette cut diamonds.
(Wikimedia Commons public domain)

The single (or eight) cut wasn't introduced in Europe until the mid-1600s. But it probably originated in India around the same time as the table cut, given its simple design. It consists of a flat table surrounded by eight or nine facets on the crown. Basically it is the square table cut with the edges rounded and faceted.

Diagram of a single cut diamond

The Mazarin Cut was conceived by the gem loving French Cardinal Mazarin in the mid 1600s. It evolved from the single cut and was the first true brilliant cut or double-cut brilliant with 17 crown facets. With the increase in facets, diamonds were starting to sparkle in the light! 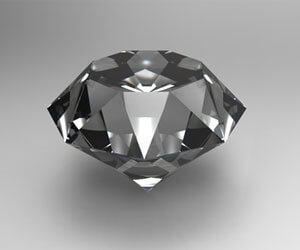 The Peruzzi Cut (circa 1700) was an improved Mazarin Cut with 33 crown facets. It was called the triple-cut brilliant. Like the Mazarin Cut, the Peruzzi Cut was cushion-shaped, rather than round. The Peruzzi cut was the inspiration for the old mine cut . 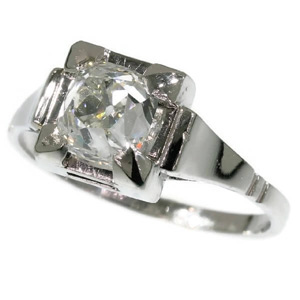 The marquise (or navette) cut was invented in France in the mid-1700s during the reign of King Louis XV. He was more adept at chasing women than ruling France. Supposedly, he commissioned the first marquise cut diamond to mimic the lips of a mistress he found absolutely irresistible. She was the charismatic Marquise de Pompadour. 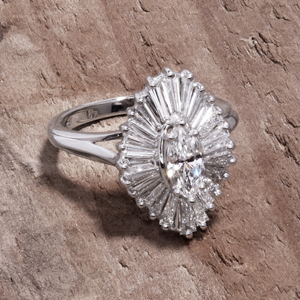 The old mine (or cushion) cut was popular from 1825 until 1900. It evolved from the Peruzzi cut and is considered an early version of the modern brilliant cut. In 1842, an enormous cache of diamonds, named the Chapada Diamantina ("Diamond Highlands"), was discovered in Brazil. The old mine cut became the most popular cut for the immense quantity of diamonds that flooded the market from this find. And even though the mid-1800s saw the rise of the Industrial Revolution, most old mine diamonds were hand cut. Therefore, along with a rather lumpy (cushion shape) appearance, old mine diamonds are never uniform. 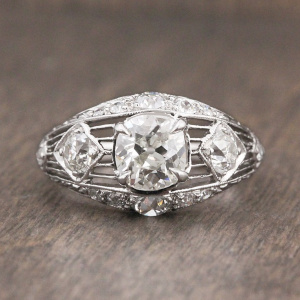 The old European (or Victorian) cut became popular after the invention of a steam powered diamond lathe in the mid-1870s. It had 58 facets on the crown like the old mine cut. It is also considered to be one of the predecessors of the modern brilliant cut. The old European cut had a more rounded profile than the old mine cut but it still looked somewhat lumpy. It remained popular until the 1930s. 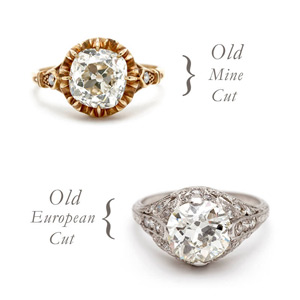 Comparison of Old Mine Cut vs Old European Cut.

The transition (or American) cut was invented in the 1870s by Henry Morse, a master diamond cutter in Boston, Massachusetts. Morse was the first to strive for diamond beauty over size in cutting. It was more important to him to reveal a diamond's most flattering form, one that captured the most light. If a large percentage of the diamond rough had to be discarded to achieve this, so be it. This was totally opposite of traditional practices which wasted as little rough diamond in the cutting process as possible.

The Asscher cut was invented in 1902 by renowned Dutch master diamond cutter, Joseph Asscher. It is a distinctive, square-like, octagonal-shaped cut with 74 step facets. Asscher cut diamonds tend to have a slightly bowed pavilion, or belly as I call it. They will be more bottom heavy than a square emerald cut, or a brilliant radiant cut.

The most famous Asscher cut of all is probably the one worn by Elizabeth Taylor. Weighing in at 33.19ct, called the Krupp Diamond, it was a doozy. Richard Burton bought it for her in 1968, for the whopping price of $305,000 - a huge sum back then. The diamond resold in 2011 by Christie's auction for 8.8 million dollars! You can read more about Elizabeth Taylor's Asscher cut diamond here.

The Asscher cut's popularity peaked during the Jazz Age in the roaring 1920s. In 2001, the Asscher family secured a new patent for the Royal Asscher Cut. Each of these diamonds is numbered with a microscopic laser tag. Since this development, Asscher cut gemstones have become very popular once again. 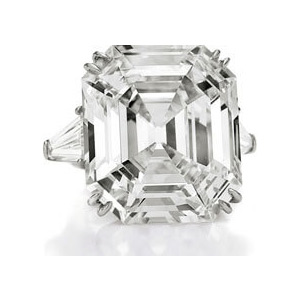 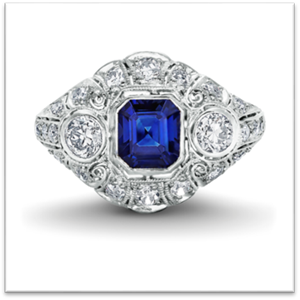 Edwardian Platinum and diamond ring with

The baguette cut was invented sometime prior to the mid-1500s. It can be seen in portraits of the wealthy from that time period on. In 1912, Cartier reintroduced the baguette cut to modern world. The elongated, table cut, rectangular shape became a staple in the geometric craze of the Art Deco movement. 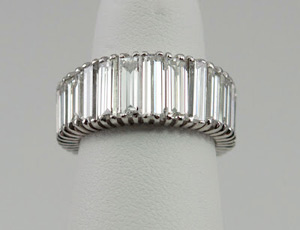 The round brilliant (or ideal) cut was the invention of Marcel Tolkowsky in 1919. Tolkowsky was a Belgian mathematician. He calculated the precise proportions and angles needed to make the most brilliant, light-catching diamond cut possible. The round brilliant cut is the standard by which all American diamonds are judged today. Tolkowsky's work is seen as the culmination of over 500 years of trying to create awe-inspiring, dazzling diamonds! 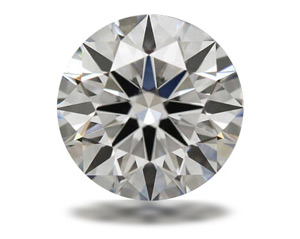 The modern oval cut was created in the early 1960s by Lazare Kaplan, a Russian born American master diamond cutter. It is a modified brilliant cut with 58 facets on its elongated crown. It should be noted that oval cut diamonds have been documented throughout history. One of the most famous oval cuts is the legendary Koh-i-Noor diamond. It was first set as the eye of a sacred Indian Hindu goddess statue until stolen by the Turks in 1310. 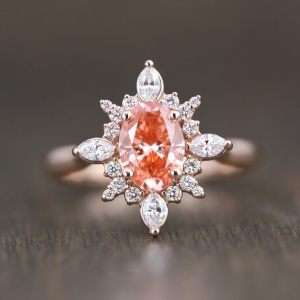 The trillion cut came out of the Netherlands in the 1970s. It is an unconventional triangular form of the modern brilliant cut with 31 facets on its crown. It can have pointed or rounded edges. The trillion cut is more often used in gemstones other than diamonds. It can be also be used for accent diamonds around a center stone of a more popular shape. 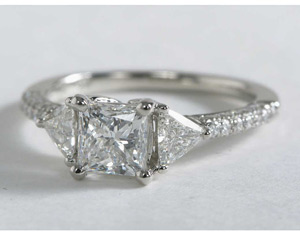 Engagement ring featuring trillion cut diamonds on either side of center
(www.bluenile.com)

Henry Grossbard, a long time diamond cutter in New York City, created the radiant cut in 1977. He saw that emerald cuts had fallen out of favor for diamonds because of their lack of brilliance. He aspired to make a square cut with the brilliance of the modern round cuts that people craved. The original radiant cut had 70 facets on the crown but Grossbard eventually settled on 66. 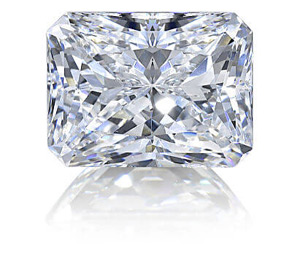 The modern princess cut diamond is square or slightly rectangular. It was supposedly developed by the Ambar Diamond Company of Los Angeles, California in 1980 although certain authorities dispute this. Contrary to popular belief, it is not a variation of the radiant cut. Princess cut diamonds have a totally different facet pattern. Today, the princess cut is a formidable competitor of the round brilliant diamond in the eyes of consumers. 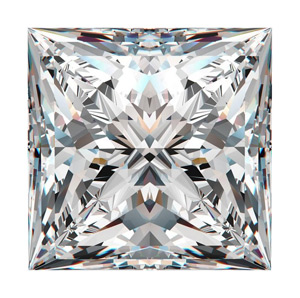 We hope you enjoyed this Diamond Cut History!


Share this Diamond Cut History with other folks who love diamonds!