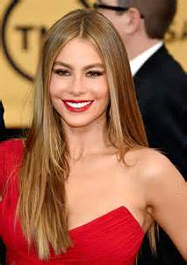 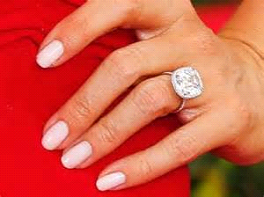 It's hard not to admire Modern Family's Sofia Vergara, reportedly the highest paid woman in Hollywood in 2014. The curvy Columbian-born television and film star is not just a bombshell with a deep, seductive voice. She's super smart and super funny, as well. (She was studying to be a dentist before a photographer discovered her on a beach in 1990.)

Just after her failed engagement to businessman Nick Loeb, True Blood star, Joe Manganiello, scooped her up. (Ironically, Sofia met Joe at a White House dinner she attended with ex-fiancé Nick!) After a whirlwind six month romance, Joe proposed to Sofia on Christmas Day of 2014. Judging from their faces in all their publicity shots since, there seem to be no regrets. It's obvious; Sofia is also thrilled with the gorgeous engagement ring Joe presented her. 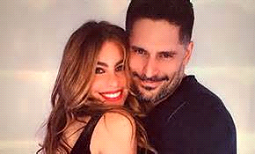 Sofia and Joe have had a whirlwind romance.
(Hellomagazine.com) 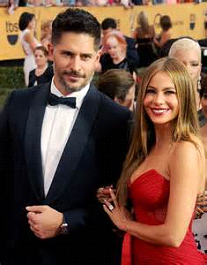 That knockout ring is hard to miss!
(Glamour.com)

Although they have not disclosed the specifics, the rumor mill is churning with guesses as to her fabulous ring's carat weight and cost. Sofia does not hesitate to show off the dazzling bauble wherever she goes. It's a vintage-style platinum halo ring with a large cushion cut center diamond. Jewelers have guessed it to be between 5 to 7 carats at a cost of $500,000 or more. The jeweler who made it for Joe to give Sofia has not yet come forward to brag about it! 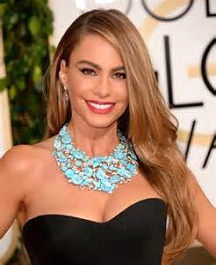 Sofia and her trademark smile.
(Altamirany.com)

Sofia Vergara was married once before to her childhood sweetheart. She has one son, Manolo, from that marriage. (Manolo is now in his early twenties.) This is the first marriage for Joe Manganiello. The couple is planning a fall 2015 wedding. In the meantime, you can bet Sofia will be flashing her dazzling engagement ring as often and easily as her trademark smile.

Here are the specifics on Sofia Vergera's ring: